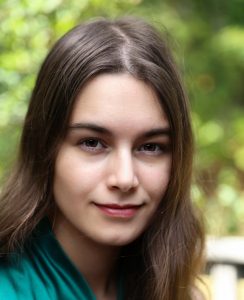 Fueled by chocolate and moonlight, Heather Hayden seeks to bring magic into the world through her stories.

A freelance editor by day, she pours heart and soul into her novels every night, spinning tales of science fiction and fantasy that sing of friendship and hope.

Heather’s publications include Augment and Upgrade, a YA science fiction duology, and ten short stories in the JL Anthology series.

How I became an Author

I grew up in the forests of Maine and on the sunny beaches of Prince Edward Island. Throughout my childhood, I could almost always be found buried nose-deep in a good story. Although I can’t remember exactly when I realized I could write stories myself, I’m grateful that my early attempts are lost in the ancient format of floppy disks.

When I was fourteen, I wrote my first fantasy novel under the influence of NaNoWriMo and a LOT of chocolate. That particular story may never see the light of day. It’s unlikely the dozen or so attempts that followed it will, either. However, after four years of college, where I took mostly science with the odd music or literature class thrown in, I returned to my passion for writing. My Senior Project at College of the Atlantic was writing and publishing a young adult science fiction novel titled Augment. In the process, I opened my own micropublishing company, Rowanwood Publishing, LLC, with my sister Heidi Hayden, a talented illustrator.

Since Augment’s publication in 2015, I’ve published ten short stories of various genres in the JL Anthology series as well as the sequel to Augment, titled Upgrade.