The only reason I didn’t finish The Electrical Menagerie in one sitting is that I started it on a red-eye flight and was too tired to keep my eyes open—much less focused on text—toward the end.

Before I get to my review, here’s the lovely cover and the blurb! 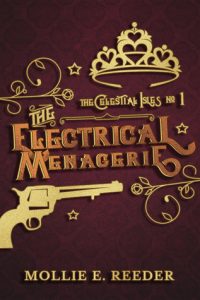 To save their show, Carthage & Huxley stake everything in a royal talent competition, vying for the once-in-a-lifetime chance to perform for the Future Celestial Queen. In this stardust-and-spark-powered empire of floating islands and flying trains, the Menagerie’s bid at fame and fortune means weathering the glamorous and cutthroat world of critics, high society, and rival magicians — but with real conspiracy lurking beneath tabloid controversy, there’s more at stake in this contest than the prize.

Behind the glittery haze of flash paper and mirrors, every competitor has something to hide…and it’s the lies Carthage & Huxley tell each other that may cost them everything.

When this book was selected for my book club’s July read, I was super excited! Steampunk is one of my favorite genres, and I’ve always been fascinated by circuses and stage magic.

I love how Reeder weaved a sense of magic through the story; even though you know it’s all trickery, it’s still a spectacular sight as Carthage appears onstage to impress the audience yet again with newly imagined creations. (My favorite scene is the butterflies.)

There is mystery and a dastardly plot afoot that Carthage and Huxley find themselves entangled in (through no fault of their own), but the heart of the story is the relationship—built of lies and fragile trust—between these two men. I was pleasantly surprised to see this be the focus, rather than a romance between one (or both) of the men and other characters. For me, that made the story all the richer.

Like a carnival ride, this story will sweep you off your feet and take you on a breathless ride. I recommend it to readers who enjoy steampunk, stage magic, and tales about the fragile beauty of companionship.

You can find The Electrical Menagerie on Amazon.